My current Creatures projects is revisiting one I dropped a while ago: Pacifica. 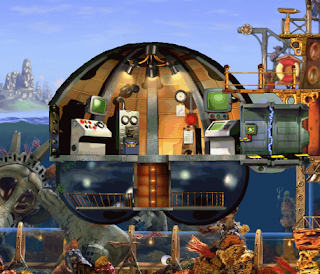 Basically it is a compliment/inspiration of Ali's Atlantis room, being bigger and above water, self contained, technological and connected to the land in contrast to Atlantis.

The graphics are adapted from a little used area in C2, with a similar switchable barrier to the right there.

It also has a teaching agent on the right-hand screen.

The left hand device I've not decided what it will do, if anything,. maybe it will just be a built in toy.

The second device is a foiod replicator which can be switched to being automatic.

there will be a lift or mover in the centre giving access to goldfish swimming in the ocean.

Perhaps too ambitious in some ways, i'll probably release it as a beta and add some more stuff later.

Feel free to send me ideas with regards to it.

Meanwhile I've been enjoying being on Discord and sharing ideas and befriending some of the CC.